Putting the Crew Together - The Keeper of Traken

Being that he was hard done by early in this run, I decided to address one of Tom Baker’s big moments. The big moment every Doctor has. His regeneration. From what I understand Baker’s end and Davison’s beginning is actually a trilogy starting with The Keeper of Traken which is a damn good idea. Why should an adventure end with a Doctor’s death, when you have the perfect story telling technique to have the bad guy win, yet the hero come back and right that wrong?

However, The Keeper of Traken also brings into stark relief the problem with my scattered approach to Who. Upon landing on Traken and meeting Tremas, I already know that this man will become the Master somehow. 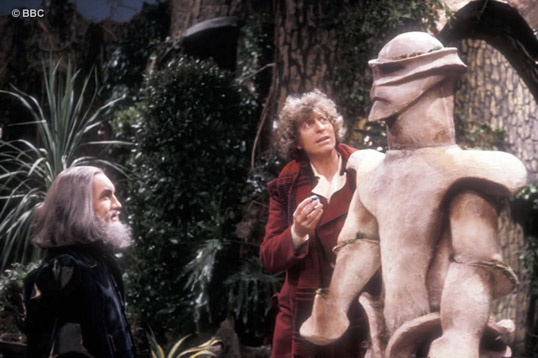 We also meet Nyssa. A companion I've only really met back in The Mutant Phase where she impressed me. She was also in Earthshock, but she might as well as not be. Her technical knowledge and engineering approach certainly sets her apart from the majority of companions. Unfortunately, that barely surfaces, the only really outstanding part so far is she’s the daughter of the man whose body is about to be stolen by the Master. The only time the technical knowledge surfaces is helping Adric, and building a stun device. The latter of which does impress the Doctor a fair bit.

Basically, with Tom Baker’s long reign as the Doctor coming to a close we’re being introduced to his successor’s companions before the successor actually appears. It’s the total Who reboot (though only really done with Three and Liz Shaw so far, and Eleven and the Ponds in New) but with a staggered approach. Allowing the viewer to learn the characters slowly instead of getting a whole new cast next season. It’s a neat approach. John Nathan-Turner was obviously a fan. He did it with every Doctor changeover he presided over. By Mel it starts getting a little ridiculous, although I’ll give him the benefit of the doubt there. I doubt they knew they were going to be sacking Colin Baker at the end of Trial of the Timelord.

However, I'm not so sure about it's actual feasibility. Adric does get a good showing here. I'd hasten to say his best, considering how he's generally seen by fandom. But Nyssa is a sidenote to him, Tremas and the impending doom hanging over the Doctor. The same is true of Peri in the future. Her arrival in Planet of Fire is completely overshadowed by Turlough leaving, since that's what the entire story revolves around.

In the end this is a okay episode, spurred along by the Master, and a ‘regeneration’ of his. As I came towards the end of part 4, and no real movement by the Master towards Tremas I wondered if this ‘trilogy’ was actually going to be far more epic than I thought. Maybe the Master is revealed, but gets away, and Tremas and Nyssa decide to help the Doctor track him down for what he did to their planet. Or maybe he kidnaps Tremas and Nyssa insists on coming along to save her dad.

Nope, instead it’s a last minute turn of events, with no build, tension or payoff. A split second of surprise, I guess, for those not expecting it. Oh, and Nyssa’s left on Traken. I’m jumping straight into Logopolis in the vague hope they can do so something with this set up.
Posted by Unknown at 11:27 am