Come up Trumps - The Raincloud Man

The Raincloud Man is one of those stories that brings one of our protagonist's secrets into stark relief by having part of the episode deal with someone else in a similar situation. It's something New Who does quiet often now that we have long running storylines. Obviously it's Charley and her time with the Eighth Doctor we're dealing with here. It's still not addressed, but it's at a point where it’s got to be happening soon.

While I’ve mostly moaned in the last few serials that this isn’t being addressed, I feel The Raincloud Man hits the exact note in how not to. Mainly because it ends with Charley going far too far. 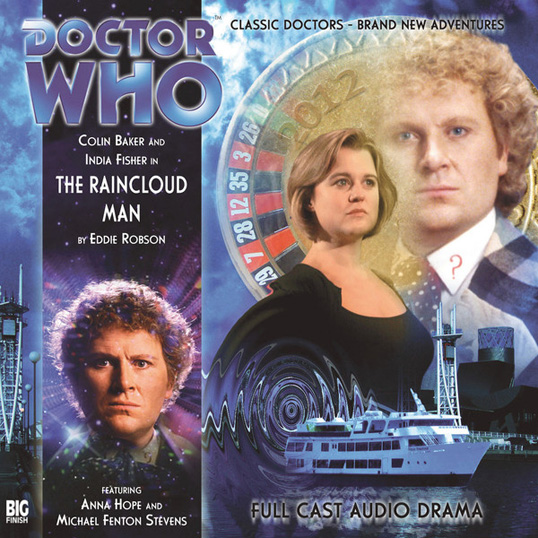 Either way we’re back in Manchester, which means a return for DI Menzies. Her time apart from the Doctor has been well spent as she has basically turned into a sheriff and fixer for the alien denizens of Manchester.

I quite like DI Menzies. Her casual acceptance of aliens in The Condemned and how it didn't really change her life was quite a refreshing change. She's a proper copper, and despite it all keeps the no-nonsense approach going. There you could tell the Doctor was warming up a companion invite right up to the point where she says she still has to do her job of catching criminals and how this doesn't change much was great. Maybe that's half the problem. The Doctor doesn't seem to want Charley as a companion. She forced herself on him at the end of “Condemned” when he was clearly gearing for Menzies. In “Brotherhood of the Daleks” he outright admits that he was going to ask Jesic. Menzies even asks to come along here, but the Doctor turns her down, not because he doesn't want her onboard, but because things with Charley are too complicated. As much as Charley was a perfect companion for the Eighth Doctor, she doesn't seem to match Sixth. Which is an interesting premise.

The closest we've gotten to that has been Peri, who got on famously with the Fifth Doctor, and bickered with the Sixth. They did get on, but it was no where near the best relationship. But the majority of her time with the Fifth Doctor is thanks to Big Finish. In the show she met him, then he regenerated, we've not really ever seen it play out before.

But anyway, there’s a whole lot going on, with multiple agendas across many characters and finally a reveal of an intergalactic war hinging on everything. So a usual Saturday for the Doctor. Then we get to the end, where everyone bar the incredibly aggressive aliens are finally on the side of the Doctor, and our pacifist hero makes a challenge to their leader to settle it all. That challenge? Top Trumps. It’s brilliantly the Doctor. I’ve not grinned at a solution for the problem for quite awhile before this. Obviously he nearly loses but through some Doctor trickery everything’s fine by the end.

However, during this Charley makes the insanely bad decision to try and steal a time machine and rewrite some history. Which is probably the one bad thing in this serial. Charley knows this is a bad decision. You can’t rewrite time. She’s the living embodiment of why you shouldn’t. I mean it’s a ploy for her to fix her own predicament, but it’s the sort of bad decision making that infuriates me about Charley.

When he finds out, we end up with the Sixth Doctor finally in position where he's stopped believing Charley's little lies because they got too big, well too obvious, and outright confronts Charley. Which is what makes the writing in the this last scene so good. He calls her Charley, the sign of a friend, something he's been reluctant to do until now, right as he confronts her. I can't wait for the next part.
Posted by Unknown at 7:34 pm