Once More Into The Fiction - The Doomwood Curse

Slight change of plans. I'm going back to just Mondays for Who postings. Mainly because I caught myself up. Planet was delayed because I was watching it in the days before release, I haven't even started The Green Death yet. This was the plan for after Capaldi Season 2, so I just brought it forward. So for now we're with Six and Charley while I get some TV under my belt.

The Doomwood Curse seems to be a play on the idea in The Mind Robber, where we have fiction coming to life. Only instead of it being a little haphazard with its approach to fiction, we basically get a re-do of Dick Turpin. However, where the Second Doctor's trip just went straight out balls to wall 'we're now in the land of fiction', Big Finish offer more of science-y explanation. That of an alien race that doesn't understand fiction, and take it for fact by running it through a machine. A machine promptly destroyed by Charley and its nanites start changing everyone's minds to operate like characters from a gothic romance.


Yes, it's a little bit dodgy. It takes a little of the romance out of the idea. Really it's an excuse to have Charley go completely off the reservation and the Doctor have to solve a problem where literary conventions, such as the quick passage of a lot of time, work against him. It's quite a clever trick, but not executed well enough to warrant an entire serial. 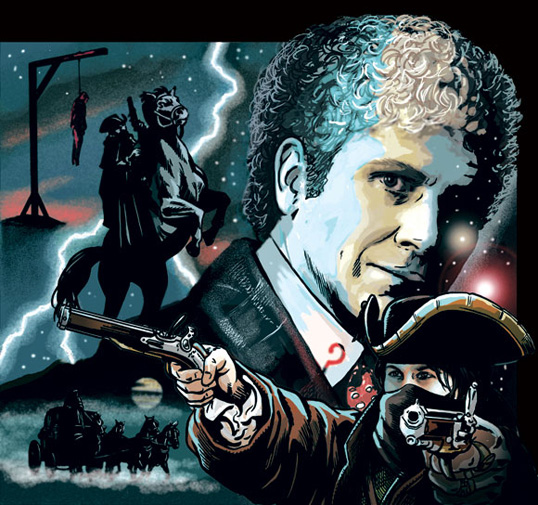 Big Finish clearly kept Charley going with Six, because despite their decision to end Eight's ongoing series they hadn't finished her story. Yet so far they've done their best to keep her and the Doctor apart. In The Condemned DI Menzies seemed to take on the Companion role, and here it's Eleanor, as Charley is whisked up into events.

So what of Charley's story? The obvious part that needs addressing is that she's with an earlier Doctor, and it's clawing at the scenery to be addressed. Six keeps catching her out as Charley slips up and mentions something she shouldn't know yet. The big mystery should be, and as set up in The Condemned is the Doctor wondering what the hell is going on with this strange girl. Here it's totally sidestepped. Which is why I think The Doomwood Curse ultimately falls flat.

We fully know that when the Eighth Doctor meets Charley it's like it's the first time for him, so we have the added mystery of how he doesn't recognise her despite one of his predecessors having her as a companion for a short time. No one for a second would believe The Sixth Doctor can't work out that she's a dab hand at this TARDIS malarky, and delaying that seems a little disingenuous.

Not that I'm against Six and Charley having normal adventures, which is really what the The Doomwood Curse is about. But I think we need to solve the problem of the Doctor figuring Charley out, and the one Doctor that most definitely wouldn't let go of that mystery until it's solved is Six. Any other might let it play out, but not Six. Have the mystery of how Eight doesn't recognise her hanging over the series, which would be much more intriguing than what we're getting.
Posted by Unknown at 9:48 am