It's another duo as we press on with Six and Charley, and hope that somewhere we'll address the elephant that is Charley's time with the Eighth Doctor. We deal with two Classic enemies, the ever present Daleks, and the only seen once Krotons. It's an interesting pair. 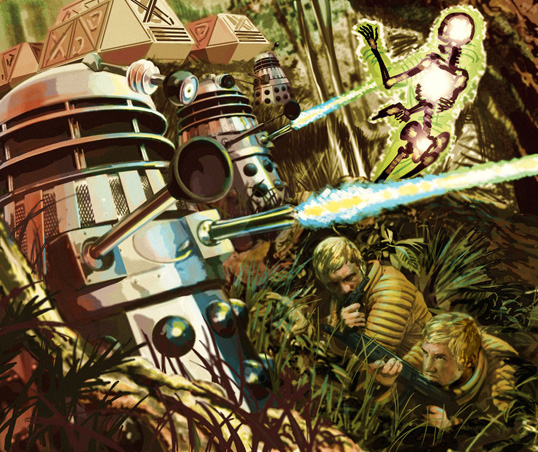 Brotherhood of the Daleks
This serial is basically a play on the same idea as Scaredy Cat. That of the idea you can brainwash the evil out of someone. I've got no problem with Who reusing plot foundations. After 50 plus years it's bound to happen. But these two are both Charley stories which makes it stand out a lot more. Big Finish try to get away with it here by upping the factor to ‘can you brainwash a Dalek into being a Thal?’ Obviously it doesn't work, but thankfully we don't rely on just that to tell the story. Instead we focus heavily on the mystery of Charley. Which is pretty impossible to avoid with Daleks.

It takes the rather brilliant turn that these Daleks are post-Terror Firma, which is way in the future for the Doctor, yet awhile ago for Charley. That they recognise Charley, and make obvious future references to the Doctor starts getting him wondering what’s going on. And everybody else for that matter. But by the end, the Doctor is no closer to the answer as to when this story started. I’m starting to think this is getting a little silly.

However, let’s not takeaway from what is a fantastic performance by India Fisher. When the Daleks send in a replicant Doctor, who does confront Charley on her behaviour and secrets, she breaks down hard, and gives a heartfelt confession that is some of the finest acting Fisher has given in the role in the seven years she’d been performing at this point. It’s a shame that this was relegated to a non-confession, because this would have been a great scene to finally out it all. 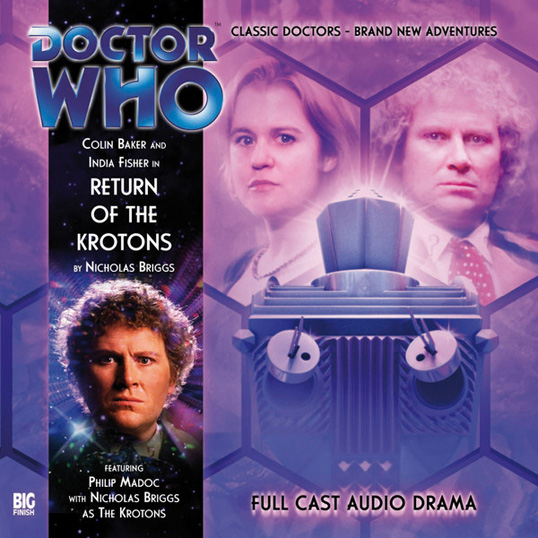 Return of the Krotons
Am I glad that I decided to throw in The Krotons during this round. Originally the plan had been just The Ice Warriors but the fact I had the first Peladon in Pertwee and The Wheel of Ice to read, at the last minute I threw in Zoe’s last two recommended appearances. Mostly for Seeds of Death, but The Krotons has had the most impact on Charley’s third and fourth season.

In her Eighth Doctor finale the HADS, an emergency relocation of the TARDIS, from that serial played a major plot device, now here with Six the actual race has come back. And I couldn’t be happier, because audio’s perfect for the Krotons. Their terrible design can be ignored, and we can concentrate on how alien they are. Which unfortunately doesn’t happen.

Not to say this isn’t a bad sequel. It’s the Dalek Invasion of Earth to The Krotons’ The Daleks. Instead of an alien world and a couple of Krotons, we have humans and enough Krotons for what eventually ends up an invasion. The Krotons are a race that could be so much more, and I’m glad Big Finish gave them this serial because one Troughton outing wasn’t enough.

There’s also references to The Ark in Space, a Fourth Doctor serial I’ve not got round to. The idea of Earth sending out colony ships to survive the Earth’s death. This this is a second ship that believes the first was a failure is another great touch. Again, it’s great the Big Finish are picking up on little bits of throwaway continuity from the old series to make a more fulfilling timeline. I realise that it’s more for the hardcore, but I’m long down that rabbit hole.
Posted by Unknown at 8:37 pm